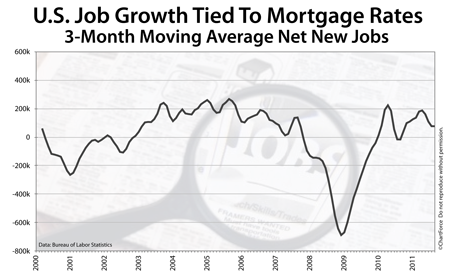 Within the next 48 hours, mortgage rates may get bouncy. The Federal Open Market Committee will adjourn from a 2-day meeting and October’s Non-Farm Payrolls report is due for release.

Of the two market movers, it’s the Non-Farm Payrolls report that may cause the most damage. Rate shoppers would do well to pay attention.

Published monthly, the “jobs report” provides sector-by-sector employment data from the month prior. It’s a product of the Bureau of Labor Statistics and includes the national Unemployment Rate.

In September, the economy added 103,000 jobs, and job creation from the two months prior was shown to be higher by 99,000 jobs higher than originally reported. This was a huge improvement over the initial August release which showed zero new jobs created.

When September’s jobs report was released, mortgage rates spiked. This is because of the correlation between jobs and the U.S. economy. There are a lot of economic “positives” when the U.S. workforce is growing.

Each of these items leads to additional hiring, and the cycle continues.

Wall Street expects that 90,000 jobs were created in October 2011. If the actual number of jobs created exceeds this estimate, it will be considered a positive for the economy, and mortgage rates should climb as Wall Street dumps mortgage-backed bonds in favor of equities.

Conversely, if the number of new jobs falls short of 90,000, it will be considered a disappointment, and mortgage rates should rise.

There is a lot of risk in floating a mortgage rate today. The Federal Reserve could make a statement that drives rates higher, and Friday’s job report could do the same. If you’re under contract for a home or planning to refinance, eliminate your interest rate risk.

This entry was posted in Mortgage News, The Economy and tagged Jobs Report, Non-Farm Payrolls, Unemployment Rate. Bookmark the permalink.