Using your hand to replicate catching and releasing air in your kite.

It was another fabulous day on Maui. The West Maui Mountains were clear as a bell across the Central Valley and the waters off Kihei were still untrammeled by the Trades. I was up early coming home from the Kula Farmer’s Market . As I took in the views I had my hand out the window and began playing with the wind. My hand became the kite, and I realized as I tipped my fingers up, I “caught” air, then tipping them down, I lost air. A mindless move we have all done many times, but this was the key I needed. By feeling the air as I drove, I was placing the kite in my mind and imagined what I was doing with the bar. Move the bar away and my finger tips fall down, pull it back and I catch air by tipping my fingers up. Often athletes visualize their moves, and I was doing the same – my gold medal was to get on the board!

Kite Dynamics while Sheeting in.

The kite is rigged with four lines, the port and starboard (red and green for you non-sailors – although for some odd reason “green” is blue in the kite world) going to the trailing edges, and two grey lines going to the leading edges. The colored lines go directly to the bar, so as I pull in or let out they affect the trailing edge of the kite, changing the leading edges’ angle up or down into the wind. Sheeting in (pulling the bar toward me) pulls the trailing edge down, trapping more air and increasing power and lift. Sheeting out has the opposite effect. Pulling on the left or right side of the bar, like a bike’s handlebars, steers the kite. Okay, so that was all very technical, but it’s kind of an important point!

The key to all this is to know how to de-power the kite. When a gust of wind takes the dragon, you have to know how to let it pass on through. I learned this first hand on a gusty day. As I tacked, and was bringing the kite over head, I was hit by a huge gust and flew at least eight to ten feet in the air – twice! Not good! Not good! In the few seconds I was playing superwoman my life didn’t flash before my eyes, but I was seriously wondering what I was doing and how the water was going to feel in about a second!! I hit the water hard (both times) then the kite, poised nose-down in the water, gave me a moment to think. I let go of the bar to sheet out completely, then pulled on one line to un-balance the kite so it wouldn’t fly again. In this moment of pause I was able to get my wits about me long enough to begin a self rescue before drifting off to Kahului Harbor. If I was more skilled I might have sheeted out as I hit the water the first time, but instead I pulled on the bar for dear life. Wrong! The next day I checked the wind chart and it turns out I was hit by a nearly 40 knot gust at that moment. It took me a week to get back in the water. But I digress… 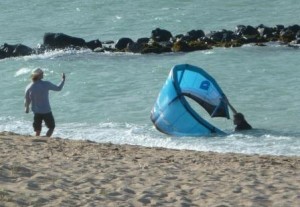 Use the kite to get you home.

Back to the story. In order to prevent an unscheduled trip to Molokai, learning how to Self Rescue is imperative. I’m told even great Kiters do this on occasion when there’s gear failure or injury, so no shame in doing it and knowing how to do it well. I became pretty good at it as I was left to work on my body drag. I also became adept at untangling my lines!

During my first real self rescue I remembered to keep lines down-stream, away from my legs. Easier said than done! I was madly treading water, drifting quickly down wind, gulping water as each white cap smacked me on the back of the head! I followed one line up to the kite, hand over hand, trying not to get anything wrapped around a finger as I inched slowly closer to my temporarily downed bird (hoping to God it wouldn’t take off.) Once at the kite, I rested on it for a minute. Its hard work swimming all that way! After trying to change the alkalinity in my mouth back to neutral I partially lay on the inflated part of the kite, then I pulled the kite over me like a bow and used the wind to get back to shore. I was surprised at how well it steered and was able to keep upwind fairly well. When I climbed out of the water my lines looked something akin to Medusa’s hair, which is where I was heading in this paragraph! Untangle your lines downwind of your kiteif you’re lucky (left), otherwise give it to your Mom to do in front of the TV! (I know of a pro-kiter who actually does that!) 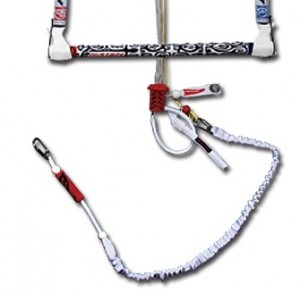 If in doubt release your Kite!

If in doubt about anything, know how to ditch all your gear. Before I could get to my kite one time, it took flight and went over the rocks. Me-smashed-on-rocks became an instant reality so I pulled the quick-release and let my kite go. The lines and bar caught the rocks and the kite floated on the other side (TG!!), but another lesson I’d rather not have learned. (This is inherently a dangerous sport and stuff happens very quickly.)

I’m finally on the water by myself. My ever-faithful instructor felt I was somehow in control. With my body lying on its side, arm out in front as a rudder and controlling the kite with one hand, I begin to gain confidence in its power. It’s a wonderful feeling to be pulled effortlessly through the water and at one point I catch myself cheering out loud! However, the task at hand is to come back upwind and end up where I started, which seems illusive. I keep heading toward shore downwind, the kite half dragging me out of the water. I’m way down the beach, close to the beloved rocks, so I trot (if you can visualize this) precariously side-stepping up the beach while still flying the kite at 11 O’Clock, my instructor holding me down, and then I stumble back in the water for another downwind ride. I’m starting to get the hang of this, and the ruthless, untamable dragon is beginning to heal to my command, although it refuses to drag me upwind. The downwind is fun, but the backward-trot workout I could do without! If I’m to avoid this embarrassing interlude each time, learning to sail upwind is the next skill to be mastered. 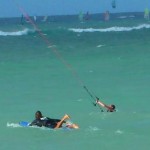 Tacking on a sail boat requires all hands on deck, letting sheets out, winching sheets in and ducking the boom. Synchronized chaos. But with a kite tacking can be almost uneventful or downright out of control. Just a slow, gentle pass overhead brings it around, but a more forceful motion can send it through the power zone and send me flying. Slow and steady wins the race. Say it over and over, Marina. Mastery seems to be the word of the day, and with time I got it. And with that, a true tack upwind brought me closer and closer to where I started on the beach. Yeah! 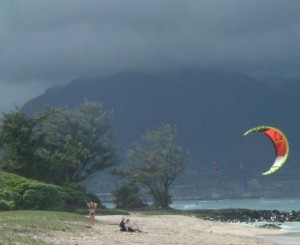 By this point in the day the sun has disappeared behind a bank of clouds enveloping Iao Valley, and the wind suddenly becomes unreliable. Gusts are followed by lulls. A kiter’s nightmare as I struggle to keep the beast from dropping in the water or jettisoning me out of it. The dragon is not happy, so I bail while I’m still in one piece. Time to dry out, pack up and be ever grateful for another perfect afternoon in Maui.

Please look for my next installment… Getting up on the board – for crying out loud!

On a more serious note. Kite boarding is a dangerous sport. You must never try this without an instructor. There are safety protocol to be learned to de-power, get rid of or cut away from your kite. The very-thin lines can tangle around limbs and if the kite suddenly fills, can cause severe injury and even death.