I can’t imagine being that physically and mentally fit to perform a 2.4 mile swim, a 112 mile bike and a marathon 26.2 mile run.  I think of myself as being in decent shape, I work out 3 times a week, eat well but I’d be done after the swim.  The athletes who participate in this event are at the top of their game, dedicated, trained, courageous and prepared for whatever it takes to try to earn the title of “IRONMAN“.

This says it all!

The idea for the Hawaiian Ironman Triathlon was created in 1977 by San Diego based John Collins as a way  challenge athletes who had successfully conquered a local biathlon by combing the three toughest endurance races in Hawaii into one event.  On February 18, 1978, 15 people traveled to Waikiki on the island of Oahu to enter into the very first Ironman challenge.  In 1981 the competition was moved to the less urbanized island of Hawaii (Big Island) and in 1982 the race date moved from February to October. An interesting fact, due to the change from February to October, in 1982 there were 2 Ironman Triathlon events.  There may have been logistical changes in the Ironman Hawaii, but the format has remained unchanged throughout its 34 years and is still regarded as an honored and prestigious triathlon event to win worldwide. 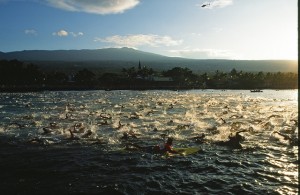 There are 3 ways to earn an entry into the 2012 Ironman World Championship: 1) Qualifying slot at one of the qualifying events held worldwide; 2) Being selected through the Ironman Lottery Program; or 3) Winning a slot through the Ironman’s charitable eBay Auction. 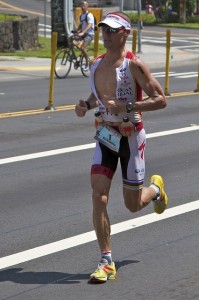 If you’re already on the Big Island or traveled to see the race or are watching  from afar on October 13, 2012, nearly 1800 athletes will embark on this journey that presents the ultimate test of body, mind and spirit to earn the title of “IRONMAN”.

Welcome to the Big Island.